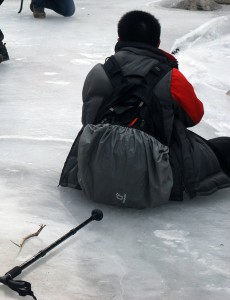 This was a difficult slip and fall case that took place in Southeast Michigan.  The facts of the case are as follows.  Our client was as older woman who had some previous significant health issues.  She had lived at this apartment for many years.  The way this apartment was set up the only way to get your garbage out of your apartment was to walk it across and long parking lot to where a dumpster was located in the far corner of the parking lot.  During the winter months this became quite challenging for our client who was older.  To make matters worse the apartment was plow the parking lot but admitted that they really did not put salt down.

On this particular day our client was going to take a few small bags of trash out to the dumpster.  It was early in the morning in the winter and it was quite cold but it was not snowing at the time.  She was carefully and slowing walking when she hit a patch of ice and fell.  She had pre-existing back problems and ended up suffering a new injury in her back for which she underwent treatment.

This case had to go into litigation into the court system but was ultimately settled.

Read more about slip and falls in Michigan at this section of our website:  https://www.mindellfirm.com/michigan-slip-and-fall-lawyers/

PROUDLY SERVING ALL OF MICHIGAN
FOR OVER 50 YEARS